The winger, who’s leaving Porto as a free agent this summer, continues to get linked to the likes of Everton and West Ham, but seems to be taking it easy before accepting any offers.

Portuguese newspaper Record brings a story today saying he’s rejected Fenerbahce. Most of the claims come from the Turkish press, saying he demands a total of €20m, being €6m from a signing prize and €14m from three years of contract.

Record then adds that other clubs such as Betis, Everton, Olympique Marseille and West Ham are all ‘attentive to the situation’, which made it impossible for Porto to hold the player. 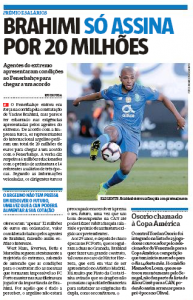 The big reason why Brahimi is in no rush is because he expects to have a great Africa Cup of Nations this summer, so more offers should come after the tournament.

Earlier this week, reports from Portugal claimed Betis had also been rejected, and the player had an offer from Everton on the table. Now Record doesn’t sound very sure about that, despite confirming the Toffees’ chase.