Home Championship From Portugal: Club could have a place for Leeds United player next...
SHARE

The article had only two lines, but that was more than enough to make some noise in the European media. First, in the English press, and now, in the Portuguese newspapers.

A Bola, Record and O Jogo all have stories covering the claims today, with not much to add, and only saying what has been pointed out in Italy.

But none of them ruled out the claims either. They actually agree that Benfica may need a defender for next season, depending on how the summer goes. 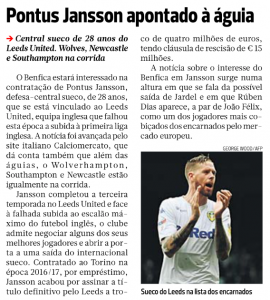 A Bola claims Jardel may leave the club, and there’s big interest in Ruben Dias as well. O Jogo also names Dias as a possible departure, and adds Ferro to that list.

So although Calcio Mercato’s story isn’t the most convincing we’ve ever seen, perhaps Benfica will have a spot for Jansson in the next season.

There’s no claim of a potential asking price from Leeds United.

Bielsa, Radrizzani and Orta all phoned player’s agent in attempt to secure Leeds signing – Tried to ‘deter’ player from joining other club

Bielsa, Radrizzani and Orta all phoned player’s agent in attempt to...