Manchester United are preparing to make a huge bid for Benfica star João Félix, according to newspaper Correio da Manhã.

The outlet claims this Saturday that the Red Devils are offering an amount of €90m, plus another €30m depending on performance bonuses.

Correio da Manhã says that the Old Trafford side are planning to sell two stars this summer, and spend the money on the 19-year-old.

It’s claimed the offer hasn’t arrived at Benfica yet, but club president Luís Felipe Vieira is already prepared for the situation. 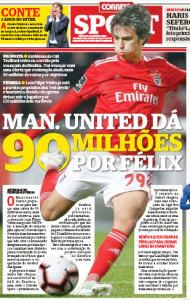 Vieira, however, continues to demand Félix’ €120m release clause to be paid, otherwise he’s not going anywhere in the next transfer window.

The local media says Benfica are hoping to get far in the Champions League next season, and keeping João Félix would be crucial for that.

Correio da Manhã says that ‘a good solution’ which would ‘be seen with good eyes’ by Benfica would be for Manchester United to buy the player now and let him stay in Lisbon for one more year.