The 44-year-old used to be Nuno Espírito Santo’s assistant at Molineux, and parted ways with the manager at the end of the season, as he now wants to become a manager.

Silva had a lot to say about his relationship with the new Tottenham Hotspur boss, but also talked about their work at Wolves and some of the Portuguese players they had at the club.

One of them is Vitinha, who was signed by the Premier League side last summer on a loan deal from Porto.

He only made 22 appearances last season, and the Molineux club didn’t trigger the buying option to sign him permanently, even though reports from the Portuguese media say there’s still the chance of a deal.

Rui Pedro Silva explained the issues the midfielder had at Wolves, and gave some advice regarding his future.

“Vitinha had enormous competition: Moutinho, Neves, Dendoncker… But he has evolved and is ready for the next level, which is to be able to play more regularly,” Rui Pedro Silva told Record. 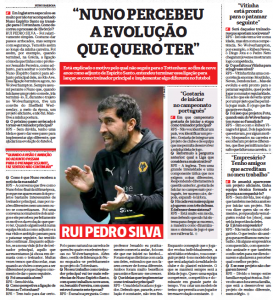 “I think he should opt for a project that allows him to play more. It’s the game that guarantees you evolution.”

Quizzed about Sporting star Pedro Gonçalves, the coach also mentioned the case of Ruben Vinagre, who’s just been loaned by Wolves to the Lions with a clause for a permanent move.

“Yes and with Rúben Vinagre it was the same. Two players who were, for some reason, blocked in their careers and chose different projects, which allowed them to take the leap that was missing in their careers.”