With their pursuit of Takehiro Tomiyasu, it appears Tottenham want a player who can play both at right-back and centre-back.

There are a few such players in Serie A, including Nikola Milenkovic, currently at Fiorentina and whose contract with the Italian club runs out next season.

The Serbian has been touted as a likely sale this summer, but it appears the offers received for the time being haven’t satisfied those in charge of the Florence club.

La Nazione look at the situation, claiming the ‘only concrete enquiry is that of Tottenham’ before adding ‘low offer’, suggesting that what Fabio Paratici put forward wasn’t really enough to convince Fiorentina to sell. 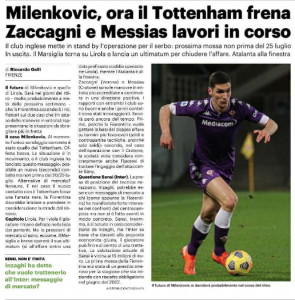 All hope isn’t lost, however, since Spurs did also send a message to the Italians saying ‘new contact is possible but not before 20th or 25th of July’.

Other than Tottenham, though, there are no good leads for the sale of Milenkovic, meaning that if this one falls through, ‘Fiorentina should start considering the route of the renewal’, which is something they have failed at so far.