With all the excitement from Italy winning the Euros on Sunday night, most of Monday’s newspapers in Italy left few column inches for transfer stories.

Il Resto del Carlino, however, did save some space to give the latest on Tottenham’s pursuit of Takehiro Tomiyasu, which appears to be coming to an end.

It’s made rather clear that Spurs are in the lead, since they are the only club mentioned by the local newspaper, who explain ‘today is the right day to reconnect’ with the Premier League club.

That suggests negotiations will continue to take place, with the aim being ‘to smooth out the now minimal difference between the English offer of €20m + bonuses and the €25m requested’ by Bologna. 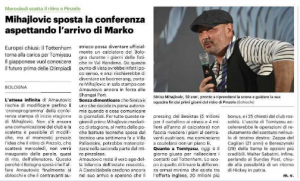 That’s good news for Fabio Paratici and co., as they appear close to sealing their first meaningful transfer at Tottenham, gifting Nuno Espirito Santo a versatile defender capable of playing both at centre-back or down the right hand side of the defence.