We’ve got some good news for West Ham fans regarding the Felipe Anderson deal on Friday.

While the deal isn’t done yet, everything in the Italian media suggest that might change very soon, and we’ll start with Corriere dello Sport for a very specific reason.

The Italian newspaper’s print edition didn’t really sound all that confident, with claims that a raise was needed before Lazio accepted the Hammers’ offer.

Their website, on the other hand, have a different version of the story, claiming that West Ham will be in Rome on Friday to try and close the deal.

To us, this suggests they received information about the Premier League club’s travels between sending the paper to print and 8:30am when the article was published on the website. 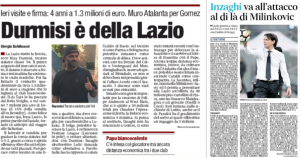 This bodes well for West Ham fans, as it appears David Gold and co. are keen on getting the deal over the line quickly.

Il Messaggero also believe the deal isn’t that far off from completion, explaining the Hammers have made a ‘take it or leave it’ offer of €38m, which the newspaper believe Claudio Lotito, the Serie A club’s president, will have to make do with.

Talks are still ongoing between both parties, but that’s mostly regarding the percentage Lazio would receive from any future sale.

Finally, Il Tempo believe there’s only a ‘small gap’ between both clubs, with €39m believed to be the final fee everyone will agree on.

It’s certainly all very optimistic, and after the purchases of Issa Diop, Lukasz Fabianski and Ryan Fredericks, the signing of Felipe Anderson would show the Premier League the club are back in business and giving Manuel Pellegrini all the tools he needs to succeed.