On Wednesday, we covered a story from Il Mattino claiming that Chelsea were still interested in Napoli’s Kalidou Koulibaly despite the story going a bit cold over the past few months.

Well, like London buses, you wait ages for some decent news concerning the Senegalese defender, and then three (or two, for now) stories come (nearly) at once.

Whether this is a continuation from the Il Mattino story, we can’t tell for sure, but Corriere dello Sport on Thursday seem a bit more informed about Chelsea’s intentions when it comes to Koulibaly.

According to the Italian newspaper, the Blues will indeed come back in the summer to try and pry the 26-year-old away from Napoli, having failed to do so last year with a reported €58m bid ‘ten months ago’. 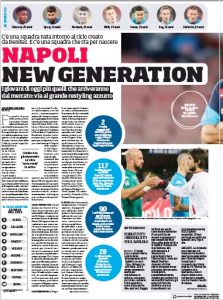 How much they would be willing to pay a year further down the line isn’t reported, but considering the centre-back hasn’t renewed his contract since, perhaps a similar bid will be enough this time around.

Whether Chelsea need another centre-back, especially with an in-form Kurt Zouma returning from his loan spell at Stoke at the end of the season, remains to be seen, and will Antonio Conte’s departure lead to a new manager having different plans for the team?

These are all questions that remain unanswered for now.