It’s been a while since we’ve covered Kalidou Koulibaly’s future at Sport Witness, mostly because everything’s been a bit quiet in Italy when it comes to the Senegalese defender.

Still doing his thing at Napoli, the 26-year-old is once again enjoying a very good season under Maurizio Sabri, but the speculation about a possible transfer move remains, and there’s only one club named: Chelsea.

The former Genk defender has been an Antonio Conte target for some time now, dating back to the Italian’s first summer in charge at Stamford Bridge.

That’s what Il Mattino are reporting on Wednesday, claiming various Premier League clubs are tracking him, including Chelsea. 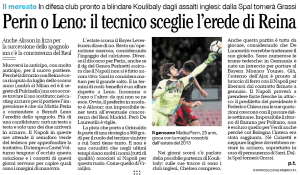 We know that Aurelio De Laurentiis will want a lot of money for the centre-back, probably starting at around €50m, which isn’t all that much in a market where Aymeric Laporte went for €60m.

As usual, we’ll have to wait and see, but, as things stand, Chelsea are still at his door.