Chris Hughton’s desire to bring Karl Toko-Ekambi to Brighton has been well documented over the past 10 months or so.

The Seagulls have seen more than one bid for the Angers striker rejected, with the latest coming in January, as the Ligue 1 side made it clear they would keep their star until the end of the season.

With 16 goals to his name this season, the 25-year-old is currently enjoying the best campaign of his career, and that has attracted a lot of interest.

Unfortunately for Brighton, who could potentially see off competition from the likes of Crystal Palace, some of the bigger European clubs have also started sniffing around. 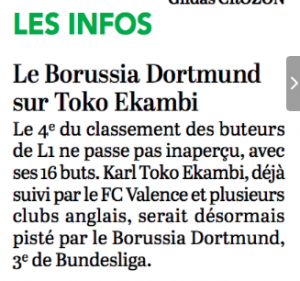 According to Le Courrier de l’Ouest on Wednesday, Borussia Dortmund, who will be looking for a new centre-forward in the summer once Michy Batshuayi returns to Chelsea, have added themselves to the list of potential suitors.

For someone like Toko Ekambi, who was still playing for Sochaux in Ligue 2 in 2016, the prospect of Champions League football will undoubtedly be a huge attraction, and is something Brighton aren’t in a position to offer.

One to keep an eye on, because it makes a lot of sense.