Manchester United were clearly far from being match fit as they faced Crystal Palace at the weekend, and their shortened summer was one of the reasons bringing in signings early was important.

That hasn’t happened, with only Donny van de Beek through the door so far, so things are going to have to seriously move in the final two weeks of the season. With the pursuit of Jadon Sancho currently looking like United’s own version of Capoeira, eyes have turned more towards Alex Telles.

The Portuguese press kicked it off by saying the player’s agent Pini Zahavi was making efforts to get his client to Old Trafford. At the end of last week there were claims from France of an agreement on salary, which was relayed a little in Portugal without much fanfare.

That was the same on Sunday. Despite Telles being on all the Portuguese front pages, the story was about him scoring twice and adding an assist in a 3-1 FC porto victory over Braga.

Monday is a little more exciting, but largely going over old claims. 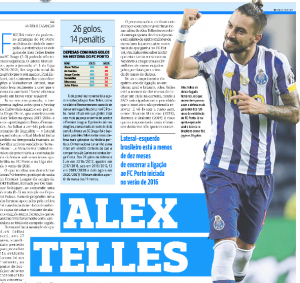 A Bola report there’s been ‘concrete progress’ in recent hours, and Zahavi is ‘mediating’ between the two clubs and ‘everything really suggests’ Telles could sign for Manchester United soon. The player has had a five year wages offer of €4m a season, nearly quadruple what he earns now, and Zahavi has informed Porto he’s trying to get United to agree to pay €20m.

The agent has been working on this for weeks now, according to previous Portuguese claims. 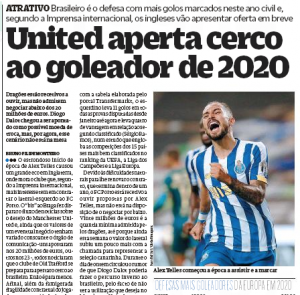 O Jogo also cover the story and say claims of Diogo Dalot potentially being used in the deal are wide of the mark, it’s ‘not on the table’ as far as Porto are concerned… they just want their €20m. They credit the United claims to the ‘international press’ and can only give Porto’s stance, with it seeming that the club haven’t yet heard anything from Ole Gunnar Solskjaer’s side.

Record have nothing independent on the matter.