Jorge Mendes has been trying to find a new home for Nelson Semedo since before the transfer window opened. His first idea, as repeatedly pushed by the Catalan media, was to work lout some kind of deal which would see Semedo swap Barcelona for Manchester City, with Joao Cancelo, another of his clients, moving the other way.

That proved hard to get off the ground, with there being repeat hints Pep Guardiola’s side weren’t taking the bait. Now it looks like Mendes has found his solution, at Wolves.

Monday’s edition of Mundo Deportivo says Semedo is ‘close to the exit’. Wolves have been ‘intensifying negotiations’ for the fullback, and Mendes is described as ‘key’.

The Portugal international is ‘close to completing his departure’ to Wolves, and Mundo go on to say: ‘Sources from Barca have been assuring for days that the transfer is a matter of hours and that it only remains to translate the agreement into the documentation that must be signed by both in the offices, for an amount of about 35-38 million euros. Others prefer to be more cautious.’

Selling Semedo is largely about finances for Barcelona, with his signing well amortised and therefore with the ability to post a profit on the books. They also need to get their 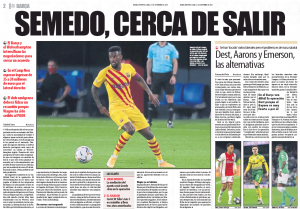 wage bill down, and whilst they want to bring in a replacement it’s made clear any operation will be low-cost.

Sport, another Catalan newspaper, say Semedo is ‘about to become’ Barcelona’s first big sale, and he’s set for Wolves. They put the transfer fee at €30-40m.