Before Wesley Hoedt left Lazio for Southampton in 2016, he managed to fall out with manager Simone Inzaghi. There were ‘some disagreements’ which largely related to the defender not ‘digesting’ technical decisions well enough.

This will be no surprise to Southampton fans, given the way the defender left them and all the snipes he’s sent to Ralph Hasenhüttl since.

Inzaghi seems to be a forgiving guy, because according to Corriere dello Sport, Lazio are keen on taking the player back this summer. It’s stated Hoedt has been flirting with the idea of a return and is now ‘expecting signals’ over a transfer to the Rome club.

Southampton would have to give the move approval, and it’s stated they want €8m as a transfer fee. 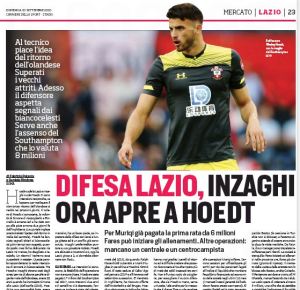 Such a transfer would be very fortunate for Hoedt, given the alternative has been signing for one of the Belgian clubs interested in him.

Lazio would bring a higher standard of league, higher wages, and would likely also provide Southampton with a better transfer fee.