On July 27th, Tuttosport reported the Toffees have informed the 29-year-old’s agent, Mino Raiola, that they would be interested in a move for his client.

Two days later, we carried a report from Calciomercato, who backed up the Merseyside club’s interest in the centre-back.

It was also stressed the Serie A winners want to extend the player’s contract, but they will ‘think twice’ if they receive an ‘important offer’.

The Nerazzurri earned a big fee from Achraf Hakimi’s sale to Paris Saint-Germain, and they need to raise more funds to ease their economic situation.

Tuttosport state Inter are finding it difficult to receive ‘worthy offers’ for their players, and to explain the current state of affairs, they use De Vrij’s case as an example. 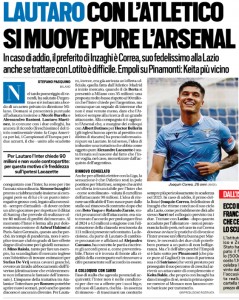 It’s claimed Raiola probed the English market for the former Lazio man, where Rafael Benítez’s side are named as a suitor.

However, the Merseyside club’s attempt to sign the player has been described as ‘rather timid’ and it’s also stressed a move to Everton doesn’t interest the Dutchman.

Clearly neither the Toffees nor De Vrij seem to be seriously interested in this potential operation.