While Manuel Locatelli hasn’t been incessantly linked with Chelsea, the news that Arsenal have been interested in him certainly has travelled across London.

As well as the Gunners, Juventus have been pushing to sign the Sassuolo star, but, faced with competition from the Premier League, have been met with a wall of around €40m that their league counterparts are refusing to lower.

Different avenues have been explored, but none have worked so far, which is why a plan B in the shape of Chelsea’s Tiemoué Bakayoko.

That’s according to Gazzetta dello Sport, who explain the defensive midfielder ‘can be considered’ going forward. 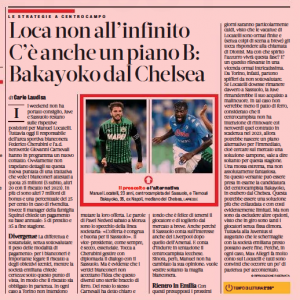 This is described as a ‘more than proven’ solution and could end up taking place with ‘clearly limited costs’.

Bakayoko is currently in the final year of his contract at Chelsea and has been looking for a way out from Stamford Bridge, as Milan have been looking to bring him back.

Juventus can now be added to that list, and we’ll have to see if they do turn their full attention to the Frenchman, which all depends on the Manuel Locatelli situation.