Since his move from Everton the Senegal international has been constantly linked with almost every big club in Turkey, but a move has never materialised.

After a difficult spell at Goodison Park the Senegalese striker has managed to find his feet this season, but the arrival of Cenk Tosun could mean his days at Everton are numbered.

Takvim say Galatasaray boss Fatih Terim has rejected the chance to sign former Chelsea striker Loic Remy because he wants a more mobile striker to partner Bafetimbi Gomis, and his preference is Niasse. 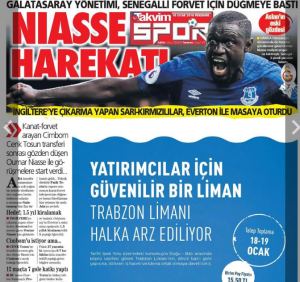 The Turkish newspaper claim Galatasaray are looking to get Niasse on a 18 month loan deal and talks with Everton are ongoing.

Niasse is said to want a move to Galatasaray after being linked with a transfer to the Turk Telekom Arena almost every window.

The player previously had a spell in Turkey with Akhisarspor.

Sam Allardyce’s opinion will obviously be crucial, and given a Niasse goal saved Everton a point against West Brom today, he may prefer to keep the striker around.