Home Europe Everton want to do transfer at £500k and £80k per week personal...
SHARE

Over the past few days, Sandro Ramirez to Sevilla has resurfaced in the Spanish media.

The Everton player seems to have been an option for half of La Liga this month, but clubs come and go without really getting close to signing him.

Sevilla are back in because they’re getting tired of waiting for Michy Batshuayi. With Chelsea looking for a replacement, and having trouble themselves, the Spanish club have grown impatient and that’s led them back to Sandro.

However, Marca explain there’s a problem with that plan too… the cost.

Everton are said to be asking for £500k for a loan transfer until the end of the season.

On top of that the Merseyside club also want Sevilla to pay Sandro’s full wages, put at £80k a 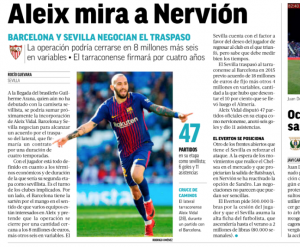 On the face of it, Everton’s demands are entirely reasonable, where Sevilla may have some room for manoeuvre is asking Sandro to take a pay cut.

If he still wants to be an actual football player then he may accept it.