Over the past couple of months, we’ve seen more and more articles suggesting that Everton are keen on AS Roma’s Cengiz Ünder.

The Turkish winger would help fill a desperate need down the right hand side of their attack, and, with a lot of potential left to fulfil, would fit right into the new young and hungry mentality Marcel Brands is trying to create at Goodison Park.

It’s been stated a number of times that Carlo Ancelotti likes what the 22-year-old has to offer, with some going as far as claiming the Italian is a ‘long-time admirer’ of the youngster.

Either way, Everton want him and they’ve now made the first steps towards trying to sign him, as Gazzetta dello Sport reveal the Toffees, alongside Bayern Munich and RB Leipzig, have ‘taken information’ about the player. 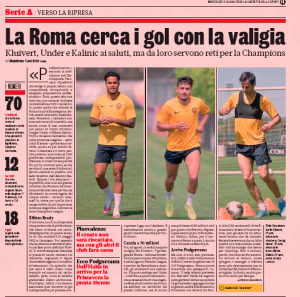 AS Roma have a clear stance when it comes to potentially selling Ünder, which is they won’t sell him ‘less than €30m’, ideally wanting to offload both him and Justin Kluivert for a combined €70m to help the club’s finances.

We’ve said this time and time again, but €30m is a very affordable price for Everton, especially when it comes to a young, talented player who would help them immediately.