UEFA handed Manchester City a two-year ban from European competitions and if that is upheld, there’s the possibility a few of their players will get itchy feet.

One such player could be Raheem Sterling, according to the Independent.

The British newspaper explained Manchester United ‘will go for him’, if he’s available this summer. They also stressed the winger is ‘likelier to go to Real Madrid’, should he decide to leave the Etihad.

The England international told AS in February that Real Madrid are a ‘fantastic club’, while insisting he’s happy at City.

Wednesday’s edition of Sport have decided to look at the claims made by the Independent and their headline states ‘Sterling is seduced’ by Los Blancos.

However, the 25-year-old’s chances of arriving in Madrid look slim because his name is not included among the La Liga club’s priority targets. 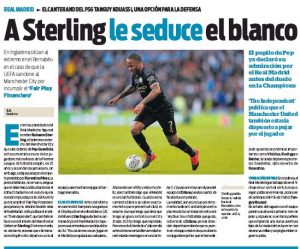 The report further adds the sporting leaders at the Spanish club understand the City star’s position is ‘more than covered’ at Santiago Bernabéu.