Even though it’s very unlikely it will happen in the coming months, Manchester United need to be prepared if they one day lose Paul Pogba.

The midfielder has made it clear he’d like new experiences in his career, with Real Madrid an alleged dream destination, but for that to happen, a club needs to convince Ed Woodward and co. to sell, which is no easy feat.

But, for fun, let’s play along with the idea and say Zinedine Zidane’s side have come forward with an adequate sum to buy Pogba.

Well, Gazzetta dello Sport explain the number one man on the list of replacements at Old Trafford is Sergej Milinković-Savić.

This won’t come as a surprise, since that was already the case last year, and it’s stated ‘the need for the Red Devils remains the same’. 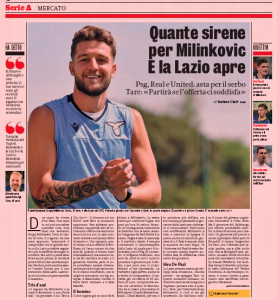 Manchester United have ‘always considered the Lazio midfielder as an ideal substitute’, but they certainly would face competition, like Paris Saint-Germain.

Real Madrid are on the case too, and it’s revealed they’ve ‘always been the team of his dreams’, as the Serbia international was born and raised in Spain.

Should they come forward, then it ‘could make a difference in the player’s choices’.

Lazio’s stance is the same, which is that if an offer that’s suitable to both the club and Milinković-Savić arrives, then he’ll be allowed to leave.

If one of the two parties isn’t happy with it, he stays.