Everton and Southampton have been put forward as possible destinations for Claudio Ranieri, according to France Football this week.

Despite being sacked for underachieving in his second season at Leicester City, the Italian manager will always be remembered as the man who brought the Premier League trophy to the King Power Stadium.

After that, he took the break he deserved, only to end up returning to football in an unlikely place: Nantes in Ligue 1.

Making quite the financial effort to attract the former Monaco manager, Waldemar Kita was apparently a bit annoyed when Ranieri expressed his interest to take over the national team, which has led to exit talks in the summer. 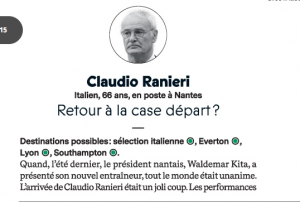 A brief rumour sending him to Lyon died down as quickly as it emerged, leaving few options for the 66-year-old since the Italy role appears promised to Mancini once the Russian Premier League season comes to an end.

However, that hasn’t stopped France Football from meekly sending him to Everton or Southampton, two clubs who could be looking for a new manager in the summer if they decide to move on from their respective stop gaps in Sam Allardyce and Mark Hughes.

Both managers have taken over at the clubs midway through the season, signing short-term deals, and there’s no guarantee the clubs see them as long-term solutions.

Of course, Southampton could easily be scratched off this list if they get relegated, the very thing Hughes was appointed to try and avoid.

As for Everton, they appear to be safe, but we’ll have to wait and see whether Farhad Moshiri decides to continue with Allardyce going forward, or if he switches things up with a manager who’s actually won a top-tier trophy before.