Barcelona defender Yerry Mina will ‘know his future’ this week, according to Mundo Deportivo.

Everton have shown ‘firm interest’ in signing the centre-back this summer. The Merseyside club are open to the idea of signing the player either on loan or a permanent transfer.

Marco Silva’s side are not the only club in the race to sign Mina, especially after his heroics for Colombia at the 2018 World Cup. The report claims Fenerbahce, Lyon, Zenit Saint Petersburg and South American side Boca Juniors are keen on landing the defender.

Mina’s uncle and agent, Jair, who has already confirmed Everton’s interest, is set to arrive in Barcelona on Tuesday and hold talks with the ‘sporting managers’ to clarify Mina’s situation. 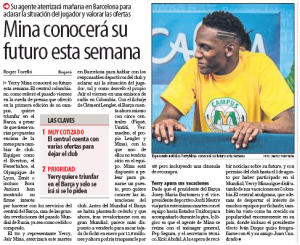 Barcelona are willing to allow Mina leave for €40m and include a buyback option. If Everton sign Mina, the player may take a while to adjust to his life in England as he won’t have any preseason training this summer.