Home Europe “Everton is a club that insists on the player” – Toffees serious...
SHARE

Everton fans, you’re going to be inundated with quotes from Yerry Mina and his uncle/agent for the next few days.

That’s because the Barcelona player held a football school in Colombia this weekend and media descended to speak about a transfer.

Yerry and uncle Jair were willing and open with the journalists who showed up, and there’s quotes popping up all over the place.

Catalan newspaper Sport has words from Jair. He’s the man who’ll be negotiating any transfer on behalf of the defender.

“For now, Yerry Mina has shown only one part. We wanted him to be in Barcelona, ​​and it was not easy. It was the number one goal and he got it. He wants to succeed in the world of football and he must do it at a big club like Barcelona. I spoke with Ramon Planes and he told me to be calm, that he has a contract and that what arrives will be heard.

“Everton is a club that insists on the player, who has called us directly. There are other teams like Zenit, but we hope Barcelona will take the initiative. He wants to play and do it in Barcelona. For Yerry Mina it would be a failure not to play. He just wants to play.” 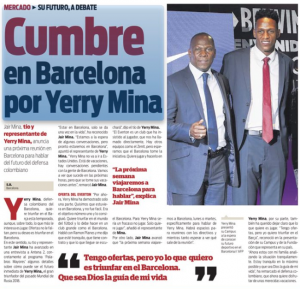 This is a little sad, because despite his World Cup heroics, Barca don’t seem too keen to keep the player around. They’ve signed Clement Lenglet from Sevilla and for the Catalan media the best thing about Mina’s good World Cup is the prospect of more money.

Should Everton be as serious as is being suggested then a loan or permanent transfer with buyback clause could be enough for Mina, so he can keep his Barca dream alive.