Jean-Michel Aulas’ desire to keep Nabil Fekir at Lyon will have increased a week ago.

Having a World Cup winner in the team will be seen a huge honour in France next season and Aulas will want to roll around in it.

That the Lyon president has already announced Fekir will be honoured by the club’s supporters, and present the World Cup trophy to them, just after the Premier League window closes is no coincidence.

Liverpool’s chances of signing the player haven’t been completely dismissed this summer and rumours continue to pop up about the transfer being saved. Typically, Aulas is spinning the situation a different way and his confidence of keeping Fekir has grown.

L’Equipe quote him as saying: “This summer, we tried to keep all our best players, Nabil is world champion, he is Lyon, we will play in the Champions League. It would be a bit damaging if we could not keep him now.

“I saw him several times in Istra  (the base camp of France during the World Cup), I did not get the impression that he absolutely wanted to leave. I want Nabil to stay, Bruno (Genesio, the manager) wants him to stay. At 90%, he will be in Lyon this season. From the moment when, at the end of July, he did not leave, he will remain.”

That would leave 10% chance of Fekir going to Liverpool or elsewhere. 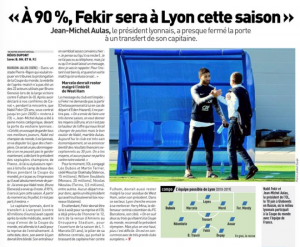 L’Equipe also state that Chelsea would consider the deal if Eden Hazard leaves this summer. Whilst there may be truth in that assumption, that’s all it seems… educated speculation.

Catalan newspaper Sport started and the French media have picked it up since.