Lille’s Thiago Mendes started in his side’s goalless draw against Everton in a preseason friendly on Saturday.

French newspaper L’Equipe claims several scouts were in attendance to watch the Brazilian in action at the Estádio Do Algarve.

West Ham United are one of the clubs ‘expected to soon be positioned’ for the 26-year-old.

The Hammers will face competition as Wolfsburg and Lazio are also interested in the midfielder. They have both submitted an offers of around €17m for the player, according to L’Equipe.

The South American has two years left on his current deal with the Ligue 1 outfit. 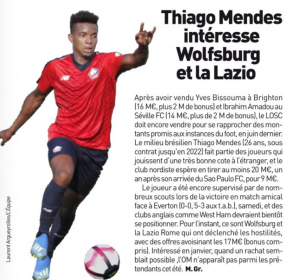 Mendes joined Lille from Brazilian club Sao Paulo FC for a reported fee of €9m. The French club are looking for at least €20m from interested clubs to allow their player leave in the summer transfer window.

Manuel Pellegrini has strengthened his midfield by signing Jack Wilshere on a free transfer. The addition of Mendes to West Ham’s squad would further strengthen the squad and be another big outlay.

Chelsea offer is for signing – Blues need to increase their...