Back in May, we brought you a report that Everton were interested in Nice midfielder Adrien Tameze.

The report, courtesy of RMC, stated Everton had the midfielder ‘in their viewfinder’ and that a move to the Premier League would be of interest.

It seems a potential exit is still on the cards, with L’Equipe covering his future today. They report that the player is considering his options after the club failed to offer him an improved deal.

Everton are named as a potential destination, with Atalanta, Lille and Monaco also name-checked by the paper. In fact, they claim he is ‘not immune’ to the approaches of the Serie A club.

They don’t specify a price tag in their report but do state that the midfielder, who cost Nice €800,000, could ‘return ten times more’ which would place him in the €8m range.

That, though, puts him over the €5m mark, meaning any potential move would have to be ratified by Jim Ratcliffe, the British millionaire who is in the process of taking over the Ligue 1 club, which has the potential to hold up proceedings should Tameze be on his way out. 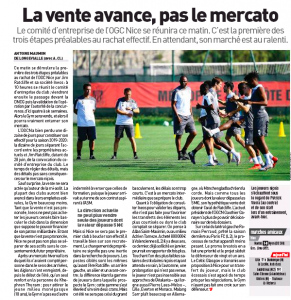 For Everton, it’s likely to be a move they’re very interested in. They could need a replacement for Idrissa Gana Gueye this summer, should PSG continue their interest, and Tameze has all the attributes to replace the Senegalese midfielder.

Even if he stays at Goodison Park, though, they also need a back up for him and an €8m fee is a good price to pay for such a player.