Diogo Dalot is one of the players who could leave Manchester United this summer, according to claims from the Portuguese media.

Following reports from the English press saying Ole Gunnar Solskjaer wants to make some room in his squad, newspaper O Jogo writes that the right-back is one of those on the way out.

They say the 21-year-old was never an option for the manager, who’s been using Aaron Wan-Bissaka as first choice, and now has Timothy Fosu-Mensah as his preferred backup.

O Jogo says there are several clubs who are interested in Dalot. One of them is Everton, since Carlo Ancelotti is looking for a right-back who can also play as a third central defender when needed. 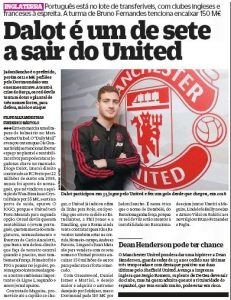 It’s claimed that the Portuguese player could also move to France. Paris Saint Germain ‘thought of him’, but there are now other ‘important’ Ligue 1 sides interested.

Manchester United spent €22m to sign Diogo Dalot from Porto back in 2018. He made 34 appearances for the club so far, being used only 11 times this season.