Even though it seems Aston Villa are no longer signing Paulinho from Braga, interesting stories about this chase continue to pop up in the Portuguese media.

The interest from the Premier League side is mentioned by two big newspapers today, A Bola and O Jogo.

A Bola writes something that was reported before, claiming that Paulinho’s move to Villa Park depended on the arrival of manager Bruno Lage, who had the striker as his priority signing.

Once Aston Villa gave up on signing the coach, the chase for Paulinho consequently collapsed as well. 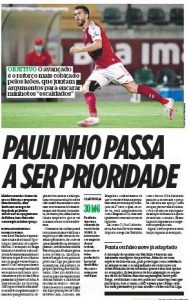 The story from O Jogo brings something very interesting about how much Aston Villa would have paid for the striker.

Paulinho is protected by a release clause of €30m, and is expected to leave Braga this summer for something close to that amount.

But O Jogo claims that Braga were willing to give Aston Villa a big discount, and were prepared to let him go for around half of the release clause.

It’s claimed that even though Paulinho is well valued by the Portuguese side, the fact he isn’t a national team player makes his price drop when moving to English clubs.

Just like A Bola, O Jogo says that once Aston Villa gave up on Bruno Lage, the operation for Paulinho was finished as well. Now the striker is heavily linked to the likes of Sporting and Wolverhampton Wanderers.