Home Europe Everton not wasting time ahead of the summer, already eyeing next target
SHARE

Towards the end of the January transfer window, Portuguese football matches had a distinct shortage of scouts. Usually one of the most popular leagues for scouting in the world, the club officials were largely absent, perhaps back at their employers going through reports previously made and identifying possible last minute targets.

Now the window has closed, it’s all back to normal. Everton were one of a number of clubs to have someone at the match between Pacos de Ferreira and Vitoria Guimaraes. Ronald Koeman’s spy was joined by others from Alaves, Montpellier, Bordeaux, Chievo, Basil and Hoffenheim. 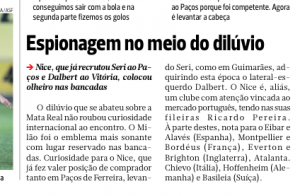 Everton’s scouting of matches in Portugal has increased under Koeman, similar to what happened when the former Benfica manager joined Southampton. For Southampton it ended up with Cedric Soares joining the club, so was work well done.

There’s no indication who Everton were watching during the match, which Pacos de Ferreira won 2-0. The best performer on the evening was Welthon, a 24 year old Brazilian forward.