David De Gea is very much a summer rumour man, the class of player far above above those pesky winter rumours. Therefore, with the close of the winter transfer rumour, the Manchester United goalkeeper will be slowly positioned as one of the potential stars of the summer rumour mill.

Of course, the destination will again be Real Madrid, and the reasons will be laid out by the Spanish media over the coming months. De Gea would want to return to Madrid for personal reasons, he’d prefer the chance to battle for the biggest trophies rather than be in a scrap to get Champions League football, and his profile, and therefore respect, would rise in Spain.

De Gea would no longer be ignored when the great and good of world football pick their best XIs. 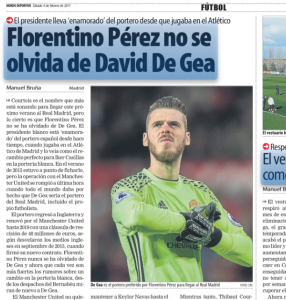 Mundo Deportivo, a Spanish newspaper of Catalan leaning, seem determined to use the situation to poke Real Madrid president Florentino Perez with a stick. They explain that whilst recent rumours have focused on Thibaut Courtois, what Perez really wants is to sign De Gea.

It’s stated that Manchester United have offered De Gea a renewal, ‘which for now has not been signed’, and this one is all gearing up for the summer.

Jose Mourinho’s club find themselves in a better position than last time thanks to the goalkeeper having a contract until June 2019, with a further year option.

Brazil and Italy fighting to have Arsenal player – Chelsea midfielder...