Home Europe Everton ‘not generous enough’ to complete transfer, could get another chance in...
SHARE

Picking up his first Norway cap at the age of 19, Sander Berge is already making a name for himself both in his home country and in Belgium, where he plays for KRC Genk.

Bought in to replace the departing Wilfried Ndidi, who signed for Leicester in January, the young defensive midfielder has had a promising start, already making 20 appearances for the Belgian side.

However, his career could have taken a different turn had he decided to skip this step of his career and sign for Everton, who were also interested in his services. 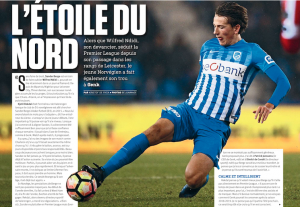 Sport/Foot in Belgium decided to get in touch with people who know the youngster to find out a bit more about the young prodigy, including the player’s former manager at Valerenga, Kjetil Rekdal.

He said: “Of course, Sander wanted to go to the Premier League, but Everton weren’t being generous enough. Genk were offering more. I told their CEO and director of football that Berge would be their best transfer. I think I convinced them to break their piggy bank and I think they’re glad to have done so.”

Spending £1.7m to bring Sander Berge to Genk, the Belgian side have reaped the benefits of beating Ronald Koeman to the 19-year-old.

The question now is: how long will he stay there before his dream move to the Premier League materialises?

Will Everton return? Most likely, but Rekdal doesn’t think Berge will leave in the summer.

He said: “He still has the time to play in a big league later. The most important for him is to get the assists and score goals, but if he develops normally, I don’t see how Genk can keep him beyond the 2018/19 season. I don’t think he’ll leave before then. It’d be too early, and I think he knows that.”

See you in a few years, then.