Andrea Ranocchia is in the Italian media every day at the moment. The player’s good form for Hull City has presented Inter Milan with an opportunity to cash in.

Ranocchia’s star had fallen hugely in Italian football and for several windows Inter had been trying to offload the player, that only Hull City managed to do a deal shows a distinct lack of serious interest.

It’s a credit to Ranocchia and Marco Silva that the defender is rebuilding his reputation, and Inter Milan now believe they can get €10m to €12m for the player. On Wednesday Gazzetta dello Sport say that ‘English clubs’ are interested, but again they don’t name them.

That’s been the theme recently, although Tuttosport claimed interest from Watford earlier this season. The Watford links are perhaps too easy to make, with Walter Mazzarri having 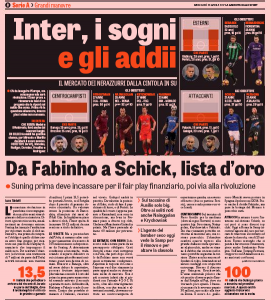 worked with the player at Inter Milan.

If Gazzetta and others even had the faintest whisper of any other clubs, they would name them.

Should the lack of interest continue and Italian newspapers throw ‘English clubs’ out there because there’s no firm line of interest, then Hull’s chances of keeping the player will increase.