Home Europe Club ‘waiting’ for Ancelotti to convince Everton to up bid for player...
SHARE

Napoli are waiting for Carlo Ancelotti to convince Everton to up their offer for Allan to €40m before sanctioning a move to Goodison Park.

That’s according to Il Mattino, who bring us their daily update on the Brazilian’s potential move to Goodison Park today.

As you’ll no doubt be aware by now, Allan has been heavily linked with Everton since January, with it believed that Carlo Ancelotti considers him the perfect addition to his midfield.

Rumours about a move have been plentiful since the January transfer window, with barely a day going by without an update on the negotiations between the two clubs.

Il Mattino have been right at the centre of that and explain what is going on in their coverage of the situation today.

They state that after spending big to sign Victor Osimhen from Lille, Napoli owner Aurelio de Laurentiis has instructed his sports director Cristiano Giuntoli to bring money in from sales.

The club need at least €170m before they can do business elsewhere and are planning on raising that through selling players such as Allan and Arkadiusz Milik.

They’ve set a €40m asking price on the Brazilian in particular, and that is a price he will refuse to move from.

The ‘numbers have to add up’ as so far Napoli find themselves in the negative because they missed out on the Champions League this season.

Negotiations with Everton over Allan are underway, and it’s stated that Giuntoli is ‘waiting’ for Ancelotti to convince the Blues to up their offer. 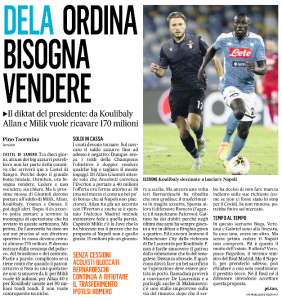 So far they’ve offered €38m, but that includes ‘a lot of bonuses’ that Napoli are not particularly happy about. The nature of these bonuses isn’t mentioned.

Allan, for his part, ‘already has a deal’ in place with Everton and even though Atlético Madrid have ‘popped up’ he intends to stick with his word and move to Merseyside.

That, though, can’t happen until Everton up their bid and match what the Italians are looking for, which it seems they are reluctant to do at present.

Il Mattino’s suggestion seems to be that at present Everton have offered a base price – perhaps the €25m bid mentioned elsewhere – plus bonuses to get to €38m.

Talk of Napoli then setting a €30m ‘take it or leave it’ offer would also make sense in that context.

It remains to be seen if the two clubs can find an agreement then, with this long-running stage still seemingly having plenty of juice left in the tank.