Home Europe Everton, Liverpool and West Ham all thrown back in for €50m striker...
SHARE

It seems that one of the worst transfer rumours from the last summer window is coming back to the Portuguese papers.

With Benfica striker Raul Jimenez making rabona assist last weekend, the club now believe they can sell him for millions and millions.

That’s what Correio da Manhã are reporting today, as they give a mention to Premier League sides such as Everton, Liverpool and West Ham United.

These are the clubs who had some interest in the player in the past, and now have tjeir names encouraging the Eagles to make a record sale in the next transfer window. 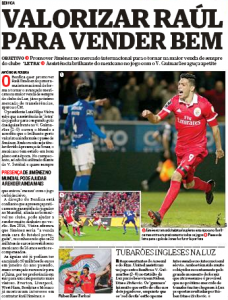 Benfica believe they can ‘value’ Raul Jimenez well to sell him for a good price. And a good price means really good, especially because of a €50m bid that arrived from China last year and was rejected.

But Jimenez is a bench player, and we still can’t see the likes of Everton, Liverpool and West Ham paying that amount, or anything like it, for a striker with four league goals scored this season.

But the campaign is on, and will be on for some time next summer. Proof of that is that Correio da Manhã is not the only one helping Benfica today, as Diário de Notícias also brings a story putting the player’s standing up as well. 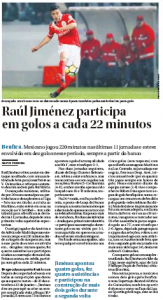 They bring a story saying Jimenez plays a direct part in a goal in every 22 minutes. That’s quite impressive indeed. But the data was only collected from the last 11 games, all of them with the player coming on as a sub. With Benfica often scoring late goals, that was predictable.

His regularity is still not trusted by manager Raul Vitória, who keeps the striker on the bench, so it tells a lot about this data.

What we can tell from these stories is that the rumours are coming, and Everton, Liverpool and West Ham are very likely to get several mentions until the summer.

Benfica have been wanting Jimenez gone for a long time now, even though it’s clear that no one will pay what they demand. But with Premier League clubs spending cash like they have been, linking players to an England move will always help to put their price up.