Barcelona are looking to offload a few of their players and Jean-Clair Todibo is one of the firm candidates to leave the club this summer.

The Premier League has been discussed as an option for the centre-back, where Everton, Watford and Southampton have been credited with an interest in him.

Earlier reports coming out of the Catalan media have explained the Frenchman having received proposals from Watford and Southampton.

On July 14th, Sport reported the La Liga side have received a ‘firm offer’ from the Toffees and Everton are ‘willing to pay’ the €20m fee demanded by Barca.

The player spent the second half of the season on loan at Schalke and they decided against making his stay permanent.

‘In the same way’, Everton, who followed the 20-year-old with ‘great interest weeks ago’, have drifted away as his next potential destination. 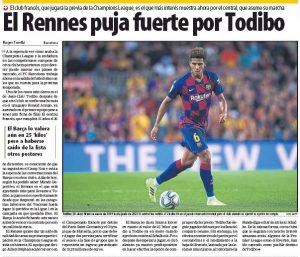 Barcelona value him around €25m and Mundo add Rennes, who have qualified for next season’s Champions League, are the club most interested in Todibo.