It’s clear that Barcelona will be looking to cut ties with some of their players and one among them is Jean-Clair Todibo.

From the Premier League, Watford and Southampton have been discussed as potential candidates for the centre-back.

On June 27th, the aforementioned clubs’ interest in the 20-year-old was backed up by Mundo Deportivo.

Reports emerging from Portugal and France have talked about Benfica and Marseille’s interest in the defender, and these claims have been relayed by Mundo Deportivo as they provide their own information on this case.

The newspaper states Sevilla cannot meet Barca’s €25m demand, while the Naples club will only consider an approach for Todibo in the event of Kalidou Koulibaly’s exit.

He spent the second half of the season on loan at Schalke and has returned to Barcelona after the completion of the Bundesliga last month.

According to Mundo, the Frenchman ‘wants to take his time’ before deciding his next club as he’s aware the Catalan club are looking to sell him this summer. 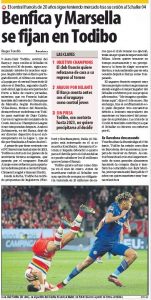 The report on Southampton making an offer for Todibo comes a day after La Provence explained the Saints, who were ‘very close’ to Reims’ Axel Disasi, had moved on.

Ralph Hasenhüttl’s side need to bring in a new centre-back and their chances of landing Todibo, as per Mundo, will completely depend on the player.

Watford, on the other hand, may struggle to sign the Barca man if they fail to stay in the Premier League.

They are 17th in the table and are four points ahead of Aston Villa and AFC Bournemouth, who are 18th and 19th respectively and have a game in hand.