For over a month, Everton interest in Barcelona defender Jean-Clair Todibo has been regularly discussed by the Catalan press.

According to Sport, the La Liga giants’ technical leaders, along with CEO Óscar Grau, have decided to make the centre-back available in the transfer market.

It’s claimed the Catalan club are demanding around €20m to part ways with the player.

The headline states the Frenchman’s ‘future is between Roma and Everton’, and within the report, it’s explained that Quique Setién’s side have received ‘firm offers’ from these two clubs.

Sport claim AS Roma are the ‘best placed club’ to sign the 20-year-old because he prefers a move to Serie A over the Premier League.

However, the Giallorossi have ‘asked for time’, but those at Camp Nou aren’t in favour of dragging on the case for long. 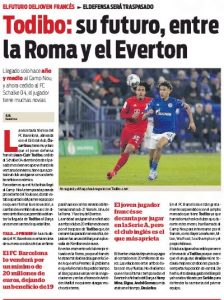 The newspaper states Carlo Anceloti’s side are ‘willing to pay’ the €20m demanded by Barca, and the Merseyside club have an advantage in the transfer, because of the good relations between the two sides.

Everton have signed Gerard Deulofeu, Yerry Mina, Lucas Digne and André Gomes from Barcelona in the past few years.

With Roma taking time to seal the operation, Sport add Everton are the club that ‘squeeze the most’ for Todibo’s signing.