Ryan Sessegnon has struggled with injuries and a lack of regular opportunities in his debut season at Tottenham Hotspur.

The 20-year-old has made 12 appearances in all competitions for Spurs, and his last outing came in his side’s Champions League defeat to RB Leipzig in March.

Four days ago, Mundo Deportivo reported Barcelona ‘like’ the England U20 international.

The Camp Nou side are looking for a backup to Jordi Alba in the left-back position, and it was also explained the former Fulham man’s profile fits the need of Barca’s technical leaders.

A day later, the Daily Star had an exclusive report, stating José Mourinho has no plans to cut ties with Sessegnon and the north London club will ‘reject all offers’ for him.

The claims made by the British press regarding the Premier League club’s refusal to negotiate for the player are relayed by journalist Miguel Rico in today’s edition of Mundo Deportivo. Rico, however, adds ‘Barca do not have the same impression’ on Sessegnon.

This suggests the Catalan club are of the belief Tottenham are ready to negotiate a transfer, even though reports state otherwise. Rico also adds the Blaugrana are ‘following’ Sessegnon. 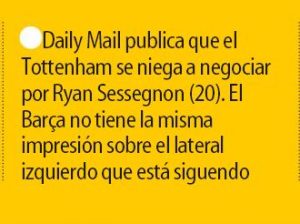 With Júnior Firpo failing to impress at Barca, reports claim Quique Setién’s would be looking to offload him and bring in a new left-back. Whether it will be Sessegnon or another player, remains to be seen.