Home Europe Everton have ‘enquired’ about 30-year-old – Has been offered by club in...
SHARE

As far as signings go, Roma got a fairly decent deal out of Diego Perotti, who has scored 26 goals and assisted 22 times in 112 appearances over the past four years.

Injuries have hindered him here and there, but the 30-year-old has responded present when fit and called upon, exemplified by his five goals in 13 Serie A games last year.

However, his age and his contract situation (expires in 2021) have made him a potential sacrifice this summer, as Roma look to bolster elsewhere, and Everton have reportedly been sniffing.

The news comes from Leggo, who claim the Argentine has been the subject of ‘enquiries’ from both the Toffees and Marseille in Ligue 1, without anything going further for now. 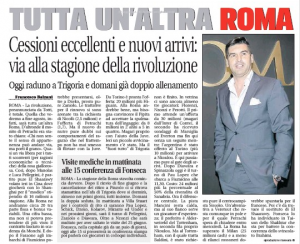 Perhaps Everton were just looking at getting someone relatively cheap to add some experience and depth to their attack, but if they are indeed interested, their time to act could be limited, as Perotti has allegedly been offered (+ €10m) by Roma as part of a deal for Nicolas Nkoulou.

There’s been no indication as of yet whether that’s been accepted or not, but the 30-year-old is clearly an expendable in Rome these days, and Marcel Brands might just be thinking about taking advantage of that.