Among the first to be linked in England with Marash Kumbulla, Everton have recurrently been mentioned over the past couple of months alongside the young defender’s name.

It makes sense, as Carlo Ancelotti only has three senior centre-backs to choose from, but the competition, which was once scarce, is starting to grow rather impressively.

While the likes of Manchester United and Manchester City have been circling too, Chelsea have been the latest to join the action, with Calciomercato last Friday claiming the Blues had watched Kumbulla ‘several times’.

However, Corriere dello Sport on Wednesday believe the Everton and Frank Lampard’s side have now come forward to ‘inform themselves’ on the player’s situation. 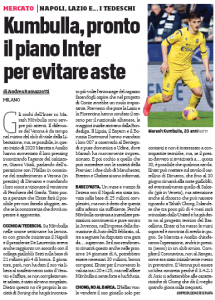 That’s an extra step from just sending scouts to watch how he fares against various opposition, and it suggests both are intrigued enough with what they’ve seen to add him to their list of targets for the summer.

As things stand, the request would be €30m from Hellas Verona, but if he continues to play the way he has, that could change and increase before the end of the campaign.

Either way, it’s affordable for clubs like Everton and Chelsea, who have never been shy to splash the cash in recent years if the right player comes along.