Home Europe Everton ‘in the queue’ for centre back – Will have to move...
SHARE

Everton are ‘in the queue’ for Verona defender Marash Kumbulla but will have to overtake Inter Milan to secure his signature.

Kumbulla has been earning plenty of attention from around Europe this month after an impressive first half of the campaign with the Serie A side.

The 19-year-old has played a crucial role in a defence that has conceded just 21 goals in 18 games so far, only three more than Juventus.

Several sides are keen on his signature and Everton, particularly Carlo Ancelotti, are known admirers.

Yesterday we covered a report from Gazzetta Dello Sport that stated they were keen on the centre back, with Ancelotti having wanted to take him to Napoli previously.

Corriere di Verona back that up today and state that Everton are ‘in the queue’ alongside the likes of Chelsea, Manchester United, Eintracht Frankfurt, Lazio and Fiorentina.

However, they will have to move quickly to get their man as Inter Milan are in ‘pole position’ at this moment in time. 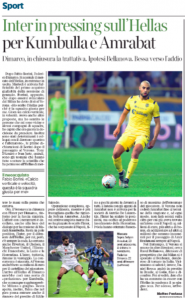 According to the report, they have been in ‘dialogue’ with Verona over a €20m move, which will happen in the summer, and are now ‘in the lead’ for his signature.

The rest of the competition are said to be ‘detached’ and will seemingly have to firm up their interest sharpish if they are not to miss out.