Leeds United fans are probably getting a little frustrated with their club for signing, and trying to sign, a series of young talents, but not really doing quite as much work for players who would go straight into Thomas Christiansen’s squad.

Well, they may have a plan coming together either for now or the next window, with Gazzetta dello Sport reporting officials from the club will have been left impressed having travelled at the weekend for Jerry Mbakogu.

The 25 year old plays for Carpi, and Gazzetta say Leeds ‘chose the right day’ to have their talent spotters run the rule over him. Mbakogu scored a goal and was the ‘driver of success’ for Carpi as they beat Spezia 2-1 in Serie B. 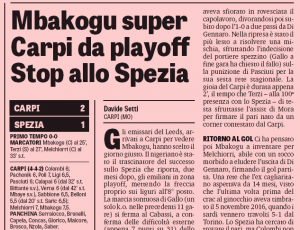 With Mbakogu being a key player for Carpi, they’d like to keep him beyond this window, but Leeds United could surely do a deal if they’re determined.

Born in Lagos, Mbakogu moved to Italy at a young age and holds an Italian passport, meaning there’d be no worry over a work permit.

Gazzetta named Mbakogu their Man of the Match.