There are few things worse than trying to complete a jigsaw puzzle and finding out you’ve lost that one piece needed to make it whole.

This is, in essence, how Roma see the Riyad Mahrez situation, with the Leicester forward the hole in Monchi’s vision, as he tries to help bridge the gap between his new side and Juventus at the top of the Serie A table.

Selling Mohamed Salah to Liverpool went a long way to fund the Serie A side’s transfer window, and even with the purchase of Cengiz Under from Basaksehir, they need someone else to bolster their front line, someone who can slot straight in.

So far, the Foxes have rejected one offer from the Serie A side, deeming it insufficient, but that hasn’t put off Monchi, who, according to Gazzetta dello Sport, is set to fly to Boston in America today to hold talks with James Pallotta, Roma’s chairman, ahead of the club’s ‘final assault’.

The aim of these talks is to find out how far the club’s bank account can be stretched to try and bring in the Leicester star.

Convincing the Premier League side to let 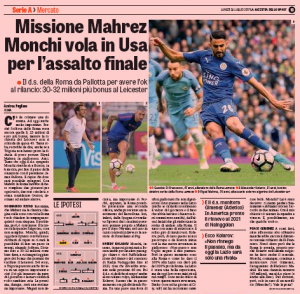 Mahrez go isn’t going to be easy, but there’s hope an improved offer of around €30m + bonuses could be enough.

Roma could also use the fact the Leicester forward has already said yes to their contractual terms as ‘leverage’ and his desire to change club in their negotiations.

Gazzetta finish by saying next week is ‘important’ but not ‘decisive’ in this saga, suggesting that even if nothing happens by Friday, this could still happen.