Following the midfielder’s loan at Rangers F.C. under Giovanni van Bronckhorst, Juventus are now trying to find a solution for a player they don’t want in their squad, as he has one year left in his contract with the club.

The outlet writes that Ramsey is one of the ‘greatest disappointments’ at the Old Lady in the past few years, as besides not meeting expectations when on the pitch, he was many times listed as injured and ‘magically’ healed to play for the national team.

His spell at Rangers included a buying option worth €6m, but since the Ibrox side have already decided not to trigger it, Juventus are presented with a deja-vu by needing to find a new solution for him. 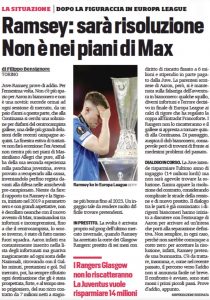 His time at the Ibrox was apparently not enough to convince any other clubs to take an interest in his signing either, so according to Corriere Dello Sport, the contract termination seems to be the best solution for his case.

So with Ramsey’s return from Rangers, ‘dialogues have begun’ with Juventus to decide how his farewell will be done.

The player is said to be asking for a severance pay, and the numbers are the only obstacle between his current situation and becoming a free agent.