With Moussa Marega completing a hundred appearances for Porto last weekend, he’s been honoured by the club with a jersey which has the number 100 on the back.

The striker has also spoken to the club’s website, claiming he now hopes to win the Portuguese Cup in the final against Sporting next Saturday.

But when covering the story, newspaper A Bola brings some bad news for Porto fans, claiming that the player is on his way to West Ham United after the final.

They say Marega is saying goodbye to the Dragons next weekend, and his destination is the Hammers. To be very clear, they state: ‘Destination? West Ham.’ 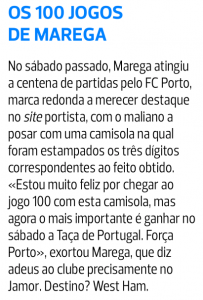 This isn’t the first time A Bola does this.

Although other newspapers have been taking it easy on the situation, the Lisbon outlets make sure to show how certain they are that Marega is ‘sold’, with the Hammers transfer being presented as a fact.

Marega has 45 goals and 19 assists in these 100 appearances for Porto. The local press believes he’s leaving for around €40m, which is the amount of his release clause.