On May 15th, claims came from Portugal that Moussa Marega is to be sold by FC Porto for around €40m. It was made clear that West Ham is thought to be the striker’s destination, after a move failed last summer.

Marega has repeatedly made it clear he fancies a move to the Premier League, and he tried to force a transfer through to the Hammers. Porto and West Ham couldn’t agree a price and the player, despite all his agitating, had to stay in Portugal for another season.

Since the claims midweek there have been further reports, with the weight of the stories suggesting a deal is close for the player to move to England.

On Sunday, A Bola take it as given.

When listing those who said goodbye to Porto yesterday, they name Eder Militao, who has already agreed a move to Real Madrid, Felipe, who will be his neighbour at Atletico, and 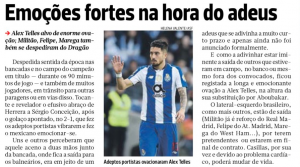 Alex Telles is also thought to be leaving, but his destination is unknown.

There’s no further details on price or contract.