Portuguese newspaper O Jogo has another story about Gelson Martins’ contract, explaining, yet again, the possibility of his release clause being raised to €100m.

The 23-year-old had an impressive season for Sporting, mostly remembered because of a good match at the Santiago Bernabeu in the Champions League. That made him look like a new star at the club, and that’s why they want him to be well protected.

Despite many months of hype from the Portuguese media, and countless links with some of Europe’s biggest clubs, only one club are said to have made actual contacts for the transfer. And that’s Liverpool. 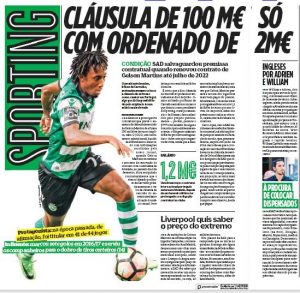 O Jogo recall Liverpool have asked for the price, and were told about the €60m release clause. No other approaches were made, although Barcelona, Juventus and Real Madrid are still said to be interested.

Some months ago, several potential Liverpool offers were reported, but that’s all long forgotten now.

Sporting being able to raise Gelson’s price, as long as they give him a pay rise, is very good protection, but against what?

It’s still unlikely any club would pay €60m for Gelson, especially Liverpool, who are looking fine with Mane and Salah on the wings. But Sporting are still sure someone is still coming in for him, and will do everything to raise his price.