The European media are paying more attention to the Championship, as it becomes clear English football’s second tier is punching above its weight.

Marca, being a Spanish newspaper, are especially interested in how their own country is having an influence on the Championship, and believe that’s evident more at Leeds United this summer than perhaps anywhere else.

Samu Saiz is the only Spaniard to reach the Championship this summer, explain Marca, and the newspaper believe he’s just another edition to a Spanish looking set-up at Leeds.

Ivan Bravo’s appointment as a director at leeds United brought Spanish attention. And the same happened with Victor Orta moving from Middlesbrough, although that did also bring an avalanche of pin-the-tail claims about Alvaro Negredo. 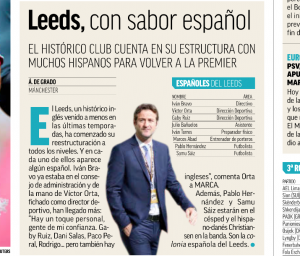 Marca have asked Orta about the Spanish influence at Elland Road, and the Leeds United Director of Football told them: “There is a personal touch, people who have my confidence. Gaby Ruiz, Dani Salas, Paco Peral, Rodrigo… but there are also English coaches.”

Leeds United seem to be building a relationship with Spanish club Cultural Leonesa, which will also add to the attention the Yorkshire club are receiving in Spain.