Manchester City’s David Silva ‘should’ sign a deal with Lazio on Monday after being convinced by the Serie A side.

The Spanish midfielder is leaving Manchester City this summer after ten years, with his contract expiring once they have finished their Champions League campaign.

It had widely been expected that he would move to America, with several MLS sides, chief among them David Beckham’s Inter Miami, thought to be trying to lure him.

However, it seems he’ll stay in Europe and will be moving to Italy, with Lazio set to finalise his deal next week.

Corriere Dello Sport explain that it is ‘just a matter of waiting a few more days’ for the deal to be finalised, as both parties need to ‘define the contractual aspects’ before signing on the dotted line.

Silva has given his agreement to the move, though, and should sign on Monday after his family spent the last few days negotiating the various aspects with Lazio.

Those talks included bonuses and benefits in his contract and various other aspects, including talk of a private plane and a house in the Ponte Milvio area for Silva’s personal trainer.

Lazio president Claudio Lotito is working on that purchase, having gone as far as to ‘divert’ his holidays to focus on getting the deal done personally.

He met with Silva’s brother, who is also his agent, Nandez Jirnenez Silva at a restaurant in Rome on Thursday to ‘close the deal’. 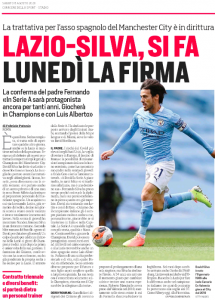 Silva is believed to have been tempted to make Lazio his next destination after leaving Manchester City for various reasons, with a desire to test himself in Serie A chief among them.

There was also concern about the Coronavirus situation in the United States, which ruled out a move to MLS and Inter Miami.

There was the option to stay at Manchester City, with Pep Guardiola and co offering him a one-year extension to his current deal, according to Corriere.

Silva, though, wasn’t interested, deeming that at 34-years-old now was the time to change and ‘try a new season’. That season, it appears, will be in Rome with Lazio.