Bayer Leverkusen chief Rudi Völler has warned Chelsea they will need to ask their matching price if they are to sign Kai Havertz this summer.

Havertz has emerged as one of the hottest prospects in Europe this summer after managing 17 goals and nine assists in 44 games in all competitions this season.

All the big clubs in Europe have been linked with a move, but it is Chelsea who are thought to be at the front of the queue for his signature.

Various reports over the last two months have indicated they are at various stages in regards to a transfer, with the only clear thing being that the Blues are interested in him.

If they wish to get a deal done, they are likely to have to pay a big fee, with claims Bayer Leverkusen could demand as much as €80m.

That remains to be seen, but Voller has insisted they will pay what Leverkusen want; otherwise, Havertz will simply stay for another year.

“He is the best I have seen here in Leverkusen, and I have been here forever. We’ve had Emerson, Ballack, Zé Roberto, Kroos, but he outstrips them again,” he told Gazzetta Dello Sport.

“We know about the interest of some teams, especially Chelsea. But for us, the matter is reasonably straightforward.

“He still has a two-year contract. If someone accepts our conditions, that’s okay; otherwise, he stays another year, and we’re happy.

“It won’t be easy, but there’s no COVID rebate for an artist like that.” 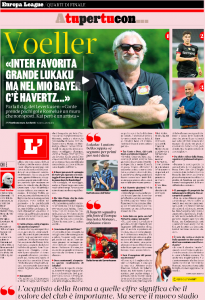 The message is clear for Chelsea; pay up or forget about signing Havertz this summer, which is hardly surprising.

That was always likely to be their stance for their star man given his importance to them and the apparent interest in him.

What is interesting is that talks don’t seem to be as advanced as earlier reports have suggested. In fact, going by Voller’s comments, they are yet to even start.

That suggests this saga, which has already had numerous twists and turns, may have a while to run yet.